Congratulations to Professor Terefe Habteyes for having his Invited Perspective article published in the Journal of Physical Chemistry! 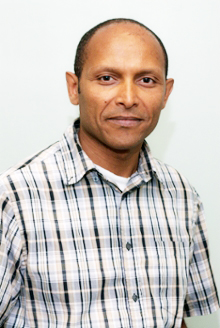 Hot electron transfer to unoccupied molecular orbitals is the most popularized mechanism for plasmon enhanced photocatalytic reactions, while a few reactions have been attributed to near-field enhanced intramolecular adsorbate electronic photoexcitation. In this Perspective, it is argued that the role of hot electrons may be limited to preparing anionic complexes that can undergo further chemical transformation via photoexcitation to dissociative potential energy surfaces. The proposed mechanism is based on careful analysis of two different examples of plasmon mediated reactions: N-demethylation of methylene blue (MB) and dissociation of CO2. In the case of MB N-demethylation, experimental evidence obtained from in situ surface enhanced Raman scattering (SERS) spectroscopy shows that MB converts selectively to thionine on gold nanoparticles (NPs) at optimal surface–molecule separation at an excitation wavelength that matches the electronic transition of the molecule. When MB is directly adsorbed on the metal NPs, the SERS spectra recorded at near-infrared wavelength indicate the formation of an anionic complex that can undergo nonselective N-demethylation when visible light is used. Similarly, comparison of the wavelength dependent plasmon mediated photocatalytic dissociation and hydrogenation of CO2 on metal NPs to the related gas phase photochemistry suggests that the mechanism likely involves photoexcitation of surface bound CO2– anions prepared via metal to molecule electron transfer. In general, it is proposed that near-field enhanced direct electronic excitation of adsorbate or adsorbate–metal complex plays a critical role in most, if not all, plasmon mediated photochemical reactions, while hot electrons prepare reactive intermediate species.